Ski resort operations tend to consume significant amounts of energy.  It is estimated that ski resorts could save hundreds of megawatt hours just by changing over to newer, greener technologies. For a single ski resort this would not only mean immediate savings of tens of thousands of Euros per year, but also a reduction of carbon dioxide emissions by millions of tons.

It is against this background that Scandinavian Ski resort operator Skistar approached Slope Lighting Solutions with a challenging question: Can you build a LED luminaire to replace existing gas discharge lamps that saves on energy, reduces light pollution, offers dimmable and instant light, better contrast view and colour appearance and that doesn’t look like a bath tub?

Slope Lighting Solutions went to work and developed the Arctic Beam, a strikingly modern looking luminaire that performs considerably better than gas discharge lamps it is set to replace. 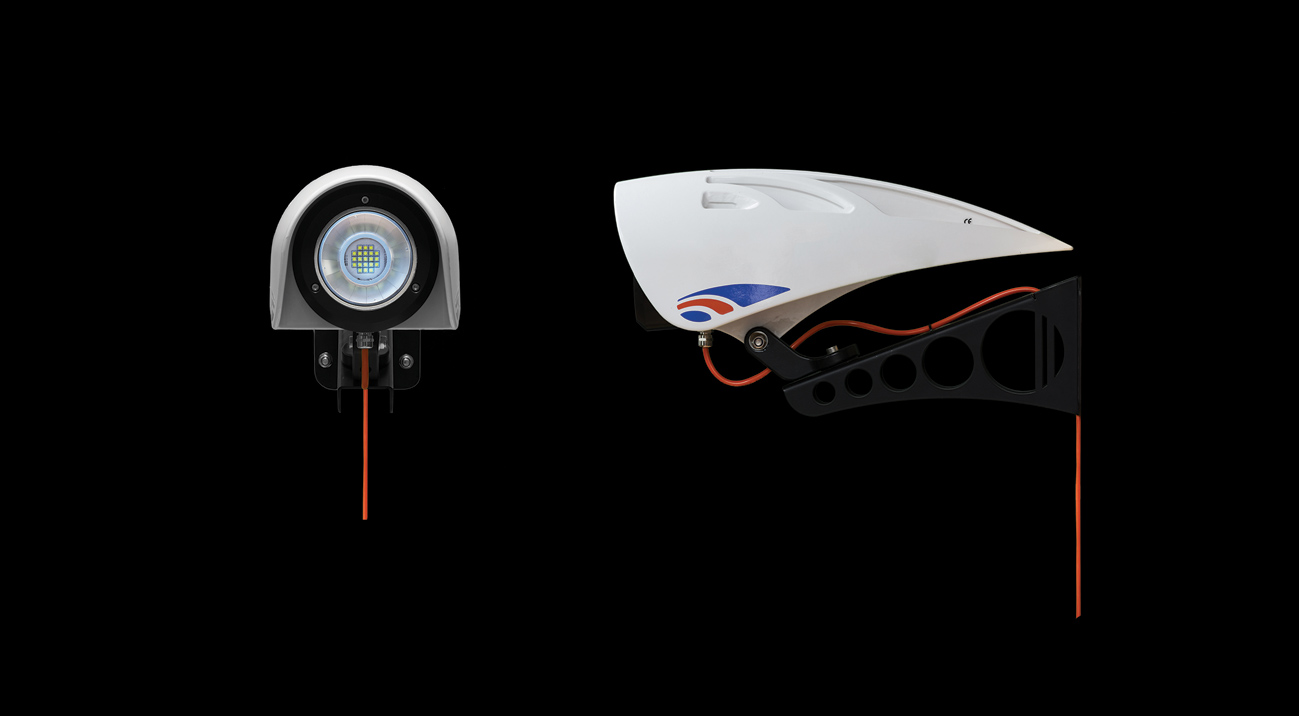 Form follows function is a very appropriate term for the Arctic Beam. Its uncompromising design reflects its characteristic light: bright and forward emitting. The streamlined shape, curved fins and sleek holes give the armature a robust and striking, futuristic look. The round body warms up and melts the snow. The holes between the fins prevent any build up of snow and allow debris to fall through. The design takes a leap into the future and really stands out in comparison with most conventional luminaires. The Arctic Beam reflects the crowd on the slopes: sportive, elegant, and willing to contribute towards a sustainable winter sports environment. 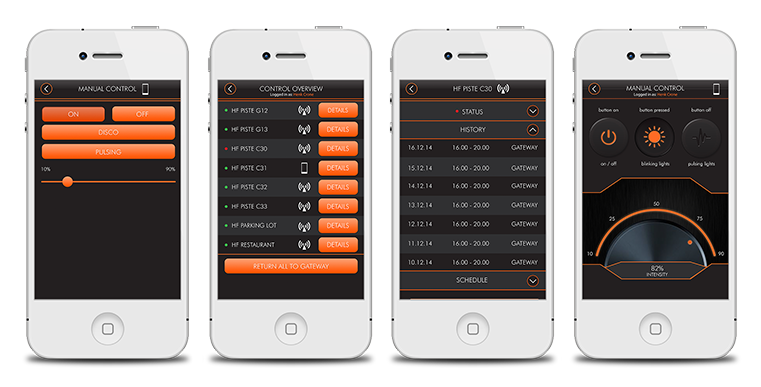 The Arctic Beam produces 30.000 lumens at a power consumption of 280 Watt. With  101 lumen per Watt the Arctic Beam is more efficient than gas discharge lamps such as high pressure sodium and metal halide lamps. Depending on the slope characteristics and desired light levels, the Arctic Beam reduces energy costs by up to 50%.

The Arctic Beam Remote Lighting Control System enables ski operators to monitor, switch and dim Arctic Beams individually or in groups. The control system is easy to install, deploy, operate and maintain. The system was specifically tested in misty conditions and hilly surroundings.The Arctic Beam Remote Lighting Control System software can be accessed through a web browser and through any tablet, Ipad or smartphone.

There are two light sensitive components in the retina of the eye, rods and cones. Rods give us our night vision capability (scotopic) vision, while cones give us our daylight (photopic) vision. The chart shows clearly that thelight emitted by the Arctic Beam falls within the scotopic sensitivity of the eye – most of the light emitted by gas discharge lamps (SONT(t) spectrum) falls outside of the scotopic sensitivity.

The ratio of scotopic luminance (or lumens) versus photopic luminance in a lamp is called the S/P ratio, which is a multiplier that determines the apparent visual brightness of a light source as well as how much light a lamp emits that is useful to the human eye, referred to as visually effective lumens (VELs). So to get the visually effective lumens of a light source we need to multiply its specifi ed lumens with the multiplier for that light source. The S/P ratio for LED is 2,1, for low pressure sodium 0,38, for high pressure sodium 0,58 and for HID metal halide 1,49. A higher S/P ratio provides higher visual brightness and sharper vision. 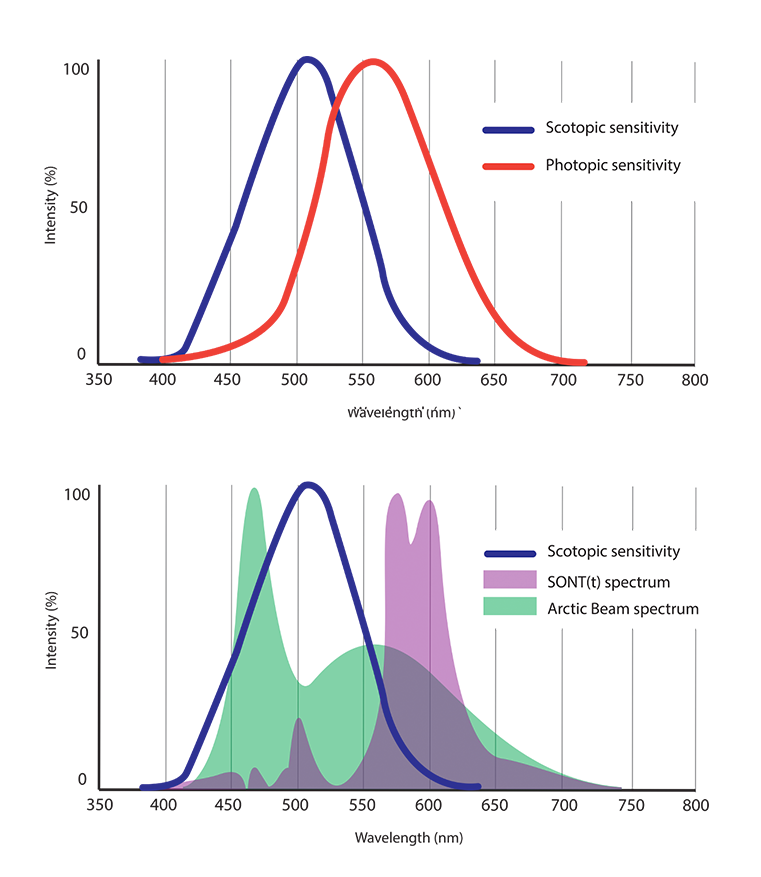 The Arctic Beam contributes signifi cantly towards reducing light pollution. In contrast with gas discharge lamps that emit their light in a broad angle and that shine 360° round, leaving light trapped within the armature, LED’s are a directional light source that always emit forward in a 120° angle. This allows us to focus the light where it is really needed, hence making more efficiently use of the light output and thereby reducing light pollution. By employing reflectors with beam angles of 36°, 46° and 60° the Arctic Beam is capable of concentrating the light even further.

Whiteout is a weather condition in which visibility and contrast are severely reduced during snowfall. The horizon disappears completely and there are no reference points at all, leaving the skier with a distorted orientation. The Arctic Beam, through its directional beam, penetrates through whiteout much better than the diffuse light of gas discharge lamps, and so contributes to better visibility and safer skiing.

Conventional lighting.
Note the spill light on the left of the slope. 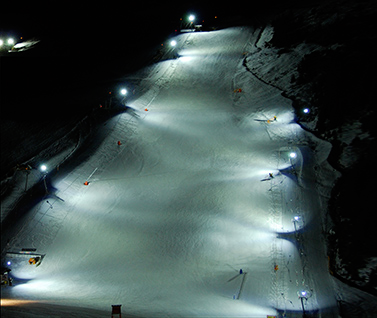 Slope illuminated with Arctic beams.
Note the absence of spill light and the high brightness of the Arctic Beams.

The Arctic Beam contains no hazardous chemicals as opposed to Gas discharge lamps that contain mercury which is toxic when released into the environment. To dispose of mercury requires special care and precautions.

With a minimum colour rendering index (CRI) of 70, the Arctic Beam makes colourful ski outfits and gear appear natural on the slope. Gas discharge lamps - with the exception of metal halide lamps – have a very poor CRI which causes objects to lose their natural colour and brightness.

The Arctic Beam has two standard Colour Temperatures: 4000K and 5000K. 5000K is preferred because of higher efficiency and higher brightness and visibility. However there is scientific evidence that bright light with a colour temperature well above 4000K can have negative effects on animal nightlife, such as disturbed rest periods, disorientation and a restricted radius of action. This is why in some countries and areas guidelines and laws have been formulated that restrict the colour temperature of luminaires for nighttime illumination to 4000K or lower.

Warm-up and restrike times are absent with the Arctic Beam. Gas discharge lamps require a period of 1 to 15 minutes to reach 90% of their full light output. Additionally, when shut down these lamps need a cool down period before they can restart. This period of time is called the restrike time and can take 20 minutes or even longer.

The Arctic Beam is easy to handle because of its low weight and compact size compared to traditional luminaires. Transport and installation are cost effective.

Depending on light level requirements the Arctic Beam is available with different beam angles (36°,46°,60°).

As a standard we offer the Arctic Beam as a turnkey solution: prewired, preinstalled electric boxes, a configured Remote Lighting Control system and software as well as suspension material is all included in the solution.

Slope Lighting Solutions offers a flexible support system to fix one, two or three Arctic Beams to a wooden pole. For steel and concrete poles, ski resorts usually have their own securing methods, but we can be of help in developing a customised solution if so required.

An advantage of the low weight of the Arctic Beam units is that there is no need to install heavy support masts. This feature is especially attractive for slopes where no other support  infrastructure is present. Slope Lighting Solutions can deliver steel tipping masts that can be operated by a single person during installation of the Arctic Beam. Once mounted, the Arctic Beam can still be repositioned by hand (pitch & jaw) and focussed by using the optional laser pointer tool. 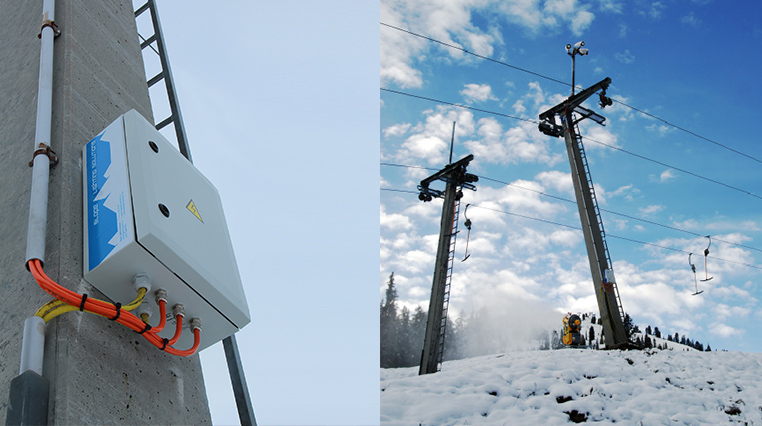